The Golf Course is situated on a Glacier Fault line which deposited large boulders over the Golf Course. These deposits date back to the Ice Age in this locality over 50,000 years ago, some fine examples of these bolder deposits are visible in the lower area of the golf course at the 5th.Tee box, now transformed into a beautiful rockery with native shrubs and flowers.

Glacial Erratic Boulders and Rocks that were transported by a Glacier and then left behind after the glacier melted have been multiply deposited in the Templemore Golf Course and surrounding areas. Erratic’s can be carried for hundreds of kilometers and can range in size from pebbles to large boulders. Scientists sometimes use Erratic’s to determine ancient glacier movement.

The following Photos show some of several Erratic’s excavated in the development of the Golf Course.  There are still hundreds of these Erratic’s deposited all over the course as shown by “Brown Markings” on the Aerial Photo. Templemore Golf Course is without doubt an interesting Historical Site. 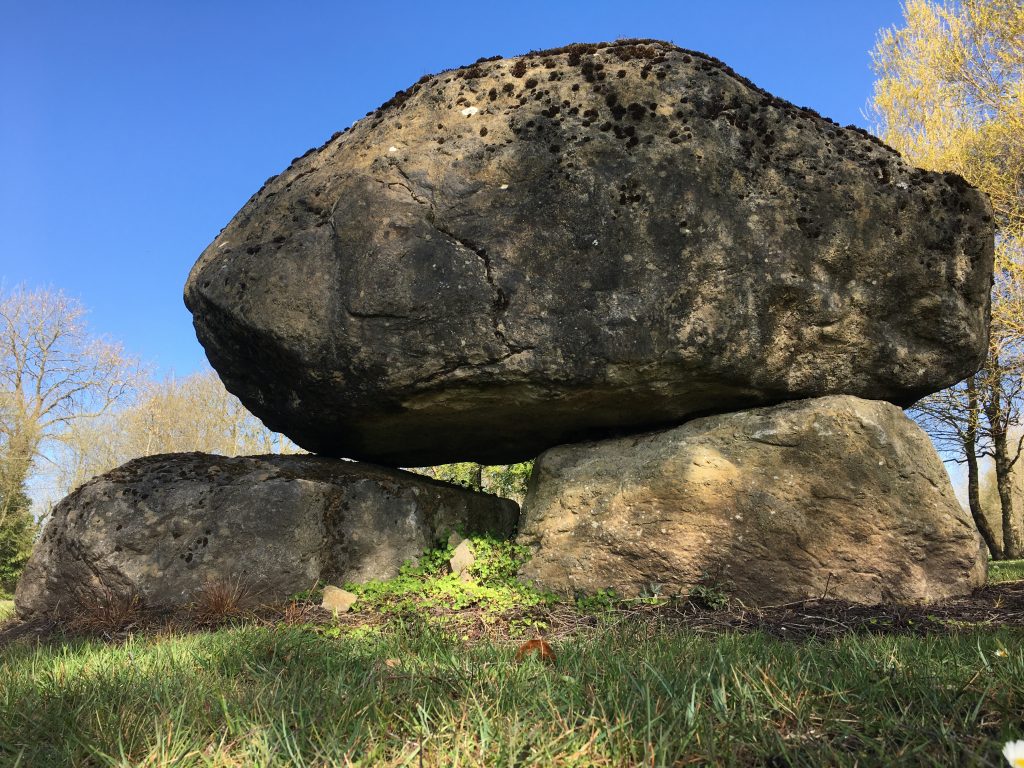 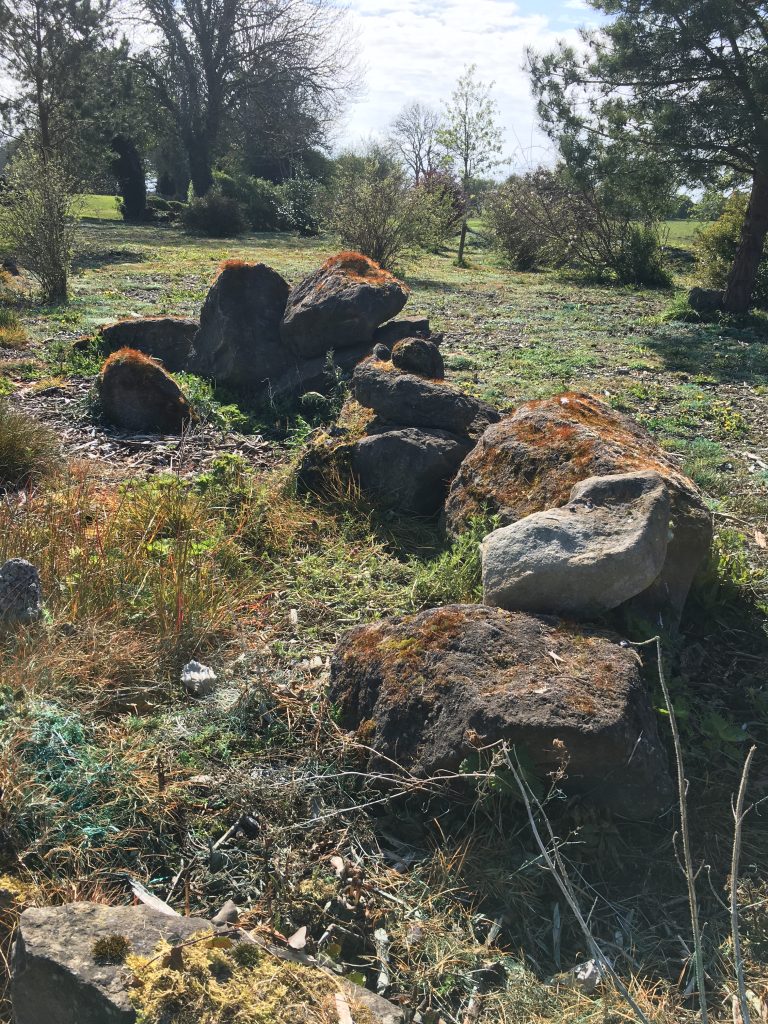 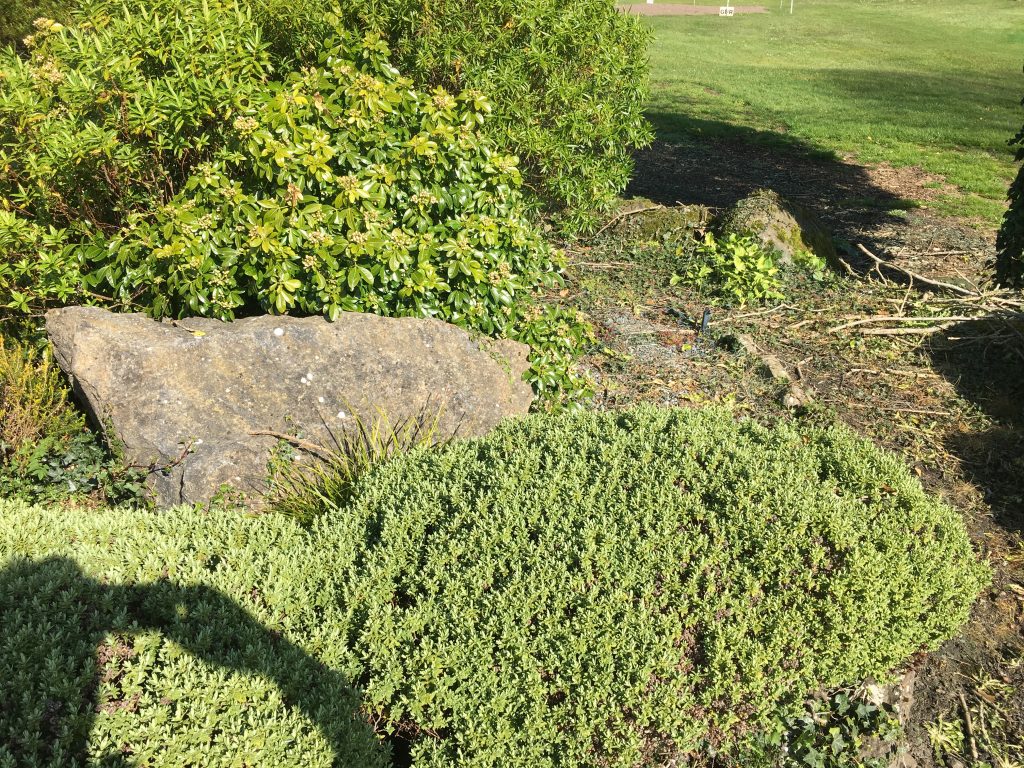 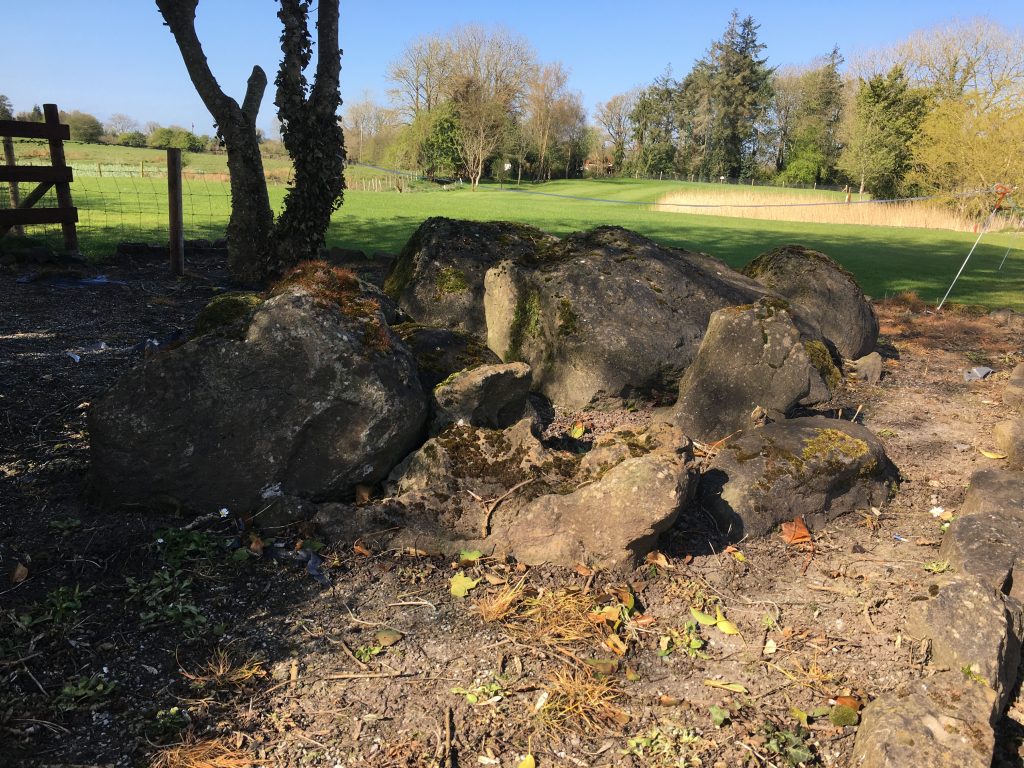 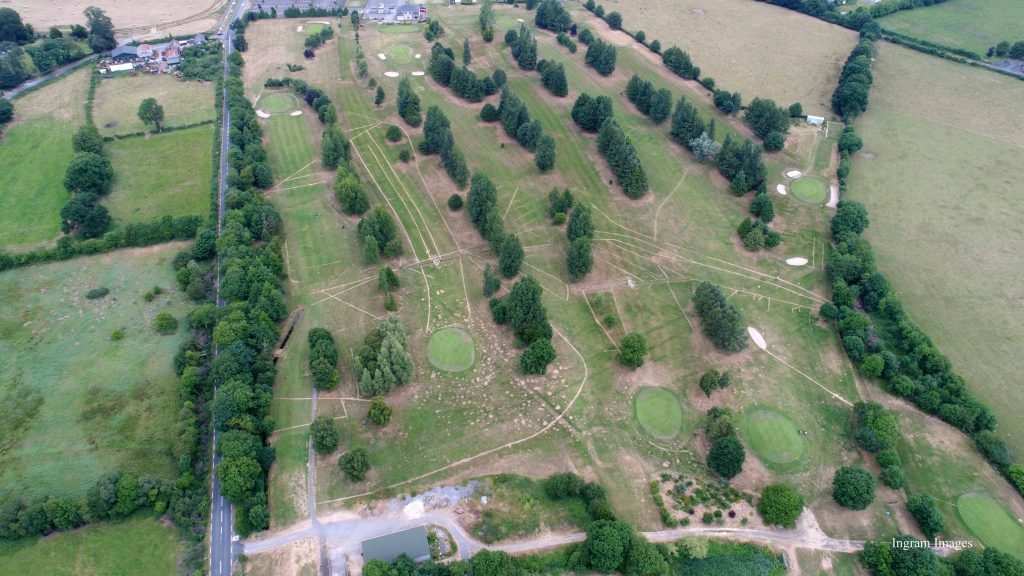 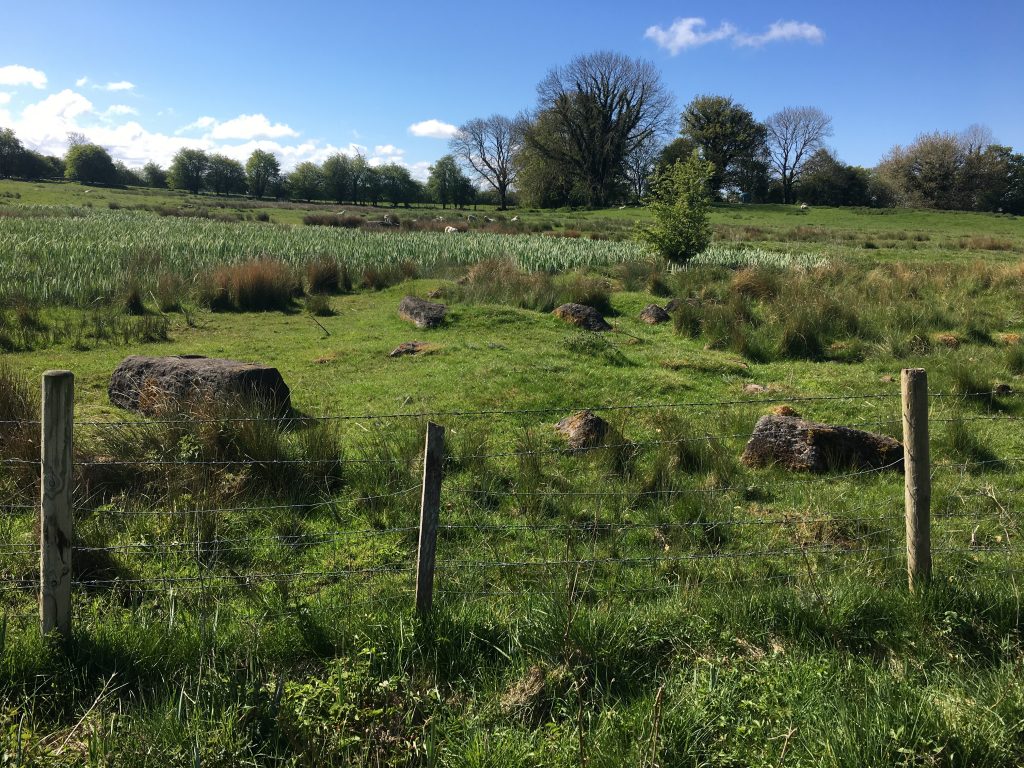 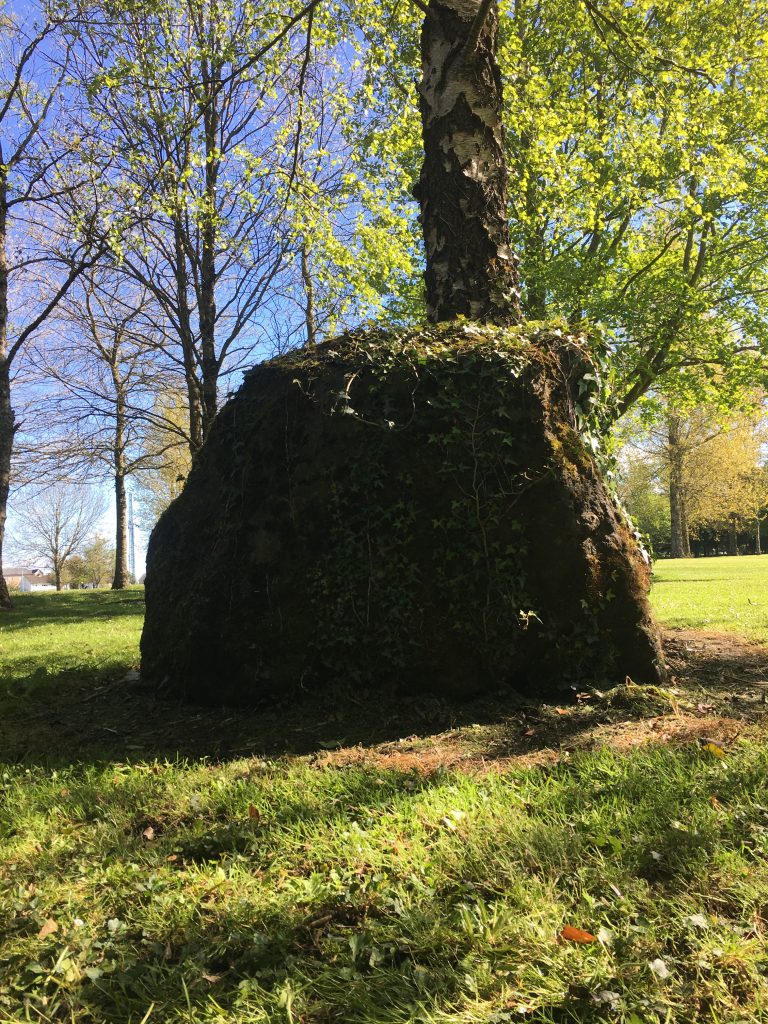 The Golf Course Land of 40 acres was donated by Sir John Craven Carden, 1st Baronet Templemore about the year 1800 as a recreational and training ground to Richmond Barracks.  It became a vast training area for The Royal Munster Fusiliers. Thousands were trained here for the western front Battlefields of Passchendaele and the Somme.  Part of the grounds were dug out with full-size trenches that looked like a battle ground.  The grounds in its history was involved in Rebellions, The Great war, The Anglo-Irish War, The Civil War and the foundation of a State.

The Guardian Newspaper (Currently, The Tipperary Star)  Article about Golf Played in Templemore in 1890. 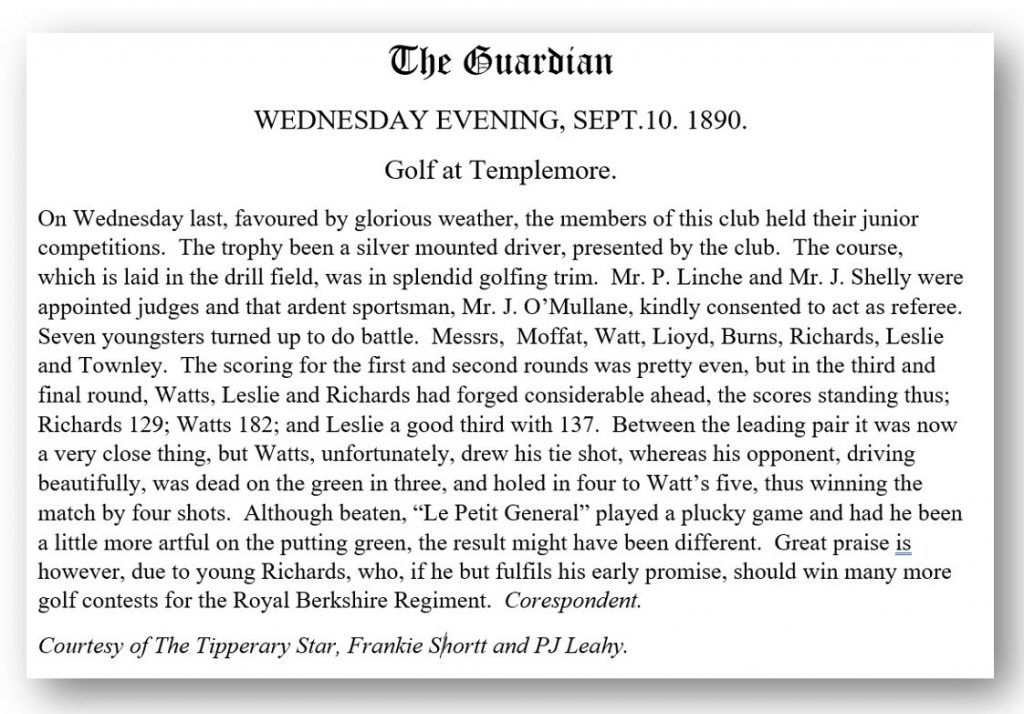 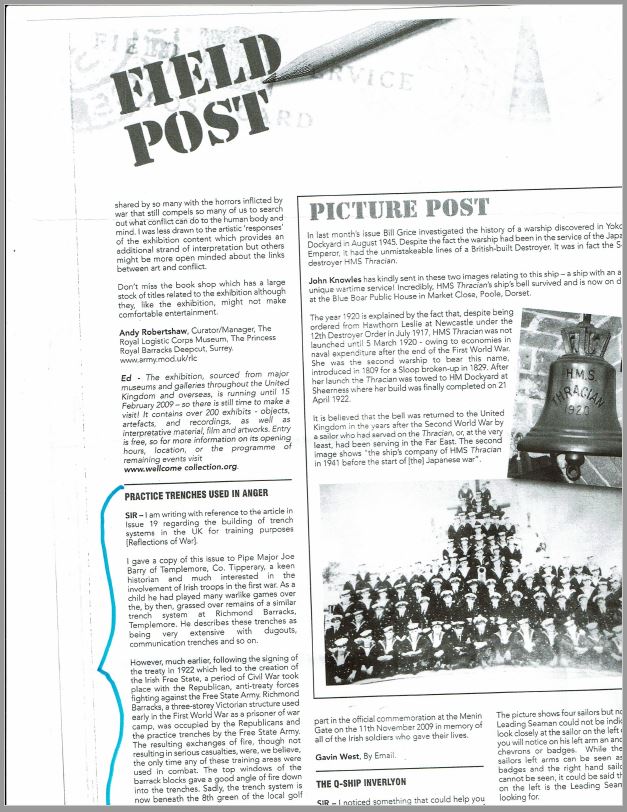 Where the 8th Tee, 9th Green and the 10th Tee area was part of the GAA field attached to the College before it became included in the present Templemore Golf Course layout.

“The transfer of Garda Training from the Phoenix Park in Dublin to McCan Barracks, Templemore  to become the new Garda Training Centre on the 14th February, 1964 was the beginning of a great journey in Garda training and development. At the same time many new relationships were built with the local community through the participation in sport and in the sharing in the life of the town and in community activities.

One of the early initiatives was the founding of a Golf Club in the town. The lands attached to the Garda Training Centre at Manna South was to become the site of the new golf course.

The first steps were taken by 23 members of Garda Staff of the Garda Training Centre on the 28th September 1971. Sergeant Pat Costello (still a member of the Golf Club) chaired this historic meeting which formally elected the first committee and named the Club, “The Garda Training Centre” Golf Club. Chief Superintendent Michael Enright (Training Officer at the time) was elected the first Captain. The first Annual Subscription was £2.00 with Recruit Gardai paying 50P to cover the duration of their training. Civilians were accepted as members the following year and many from the local community joined the Club. Mrs Mary Long was elected the first Lady Captain at their first AGM on the 21st April 1975. The Club later became known as Templemore Golf Club to aid administration in the late 1980’s.

Much of the original ground work involved the removal of furze, rocks and mounds in order to build tees and greens. This was carried out by Garda staff from the Training Centre supported by Recruit Gardai. Minutes of a meeting in 1972 suggested that up to 50 sheep be used to graze the course to keep the grass under control. While two committee members undertook this task, there is no record of the sheep arriving. Over the following two years the 9 Holes had matured and developed through the voluntary work of both Gardai and Civilian members, some of whom made their machinery available to improve and landscape the Course.

In 1974 the first 9 hole layout on 27.871 acres was officially measured at 4564 yards for 18 Holes, Par 66 and was affiliated to the Golfing Union of Ireland and the Irish Ladies Golfing Union. To-day the Course has been developed to a much more challenging 6358 yards from the white markers.

In the years up to 1980 the Club was administered jointly by Gardai and Civilian members with alternating Captains, however, a new Constitution was introduced that year which directed that the Golf Club be administered and run by serving members of An Garda Siochana from the Training Centre and the local Garda Station. This arrangement continued for the next 20 years. This was a period of great growth in membership with golfers joining from many surrounding areas up to 20 mile radius. It was also a period of great support from local traders, service providers and industry through sponsorship of weekly competitions and open weeks. The Club began to make its mark in team competitions in both the Men’s and Ladies Clubs, however, it was the Ladies who won the first Pennants with success in  the Munster and All-Ireland Titles in the Huzzar Vodka Foursomes in 1987. The Men’s Club brought success in 1994 & 1995 by winning the Munster Country Clubs Cup. The Club also won the inaugural Heineken Mixed Foursomes in 1994. These successes were instrumental in lifting morale in the Club and bringing a great sense of pride to the Garda College, Templemore Town and surrounding communities due to team members representing these places.

A new Clubhouse and Machinery Shed was provided at the Club by the Garda Training authorities in 1987 which was a substantial improvement on the original Pre-Fab structure that had doubled as a Meeting Room and Machinery Shed from the early days.

Recruit Training and Garda Management was raised to a higher academic profile following the implementation of the Walsh Training Committee Reports from 1989 onwards. The new third level Garda College  made major investments by the acquisition of the Golf Club lands, the building of new Floodlit Tennis Courts and a new  Clubhouse that was registered  as the Garda College Golf & Leisure Club and officially opened in 1998. Substantial additional car parking was also provided.

A new Golf Constitution was drafted towards the end of 1999. It provided a new framework serving the interests of the Garda College and the Golf Club and opened up the administration of Golf and the holding of office to the wider civilian membership. It also provided for the use of the Golf Course and Clubhouse facilities under licence from the College Authorities. In March 2000 the new Constitution was formally adopted by the Golf Club. Mr. Tom Kenny was elected Men’s Captain and M/s Kay O’Regan Lady Captain.

This new era saw the development of the social side of the Club with the use of the facilities in the new Clubhouse for meetings, presentations and all the major golfing events. In the years that followed the Golf Club put together a three year development plan to build new Tees, Greens, Bunkers, major drainage, purchase of new machinery and the building of a new Machinery Shed. Some additional portions of land were purchased by the Garda College to accommodate a new Tee and Green on the eastern side of the property. These works involved major capital investment by the Club which required a financial plan that has had some restructuring due to the economic recession that has affected us all since 2008.The extended new course we now enjoy was opened in May 2005.

The Golf Club continues to enjoy an excellent working relationship with the Garda College Authorities. We wish to congratulate them on 50 years in the service of Garda Training and to acknowledge their great support to Templemore and the surrounding communities over that period..   By John Noel Galvin. “