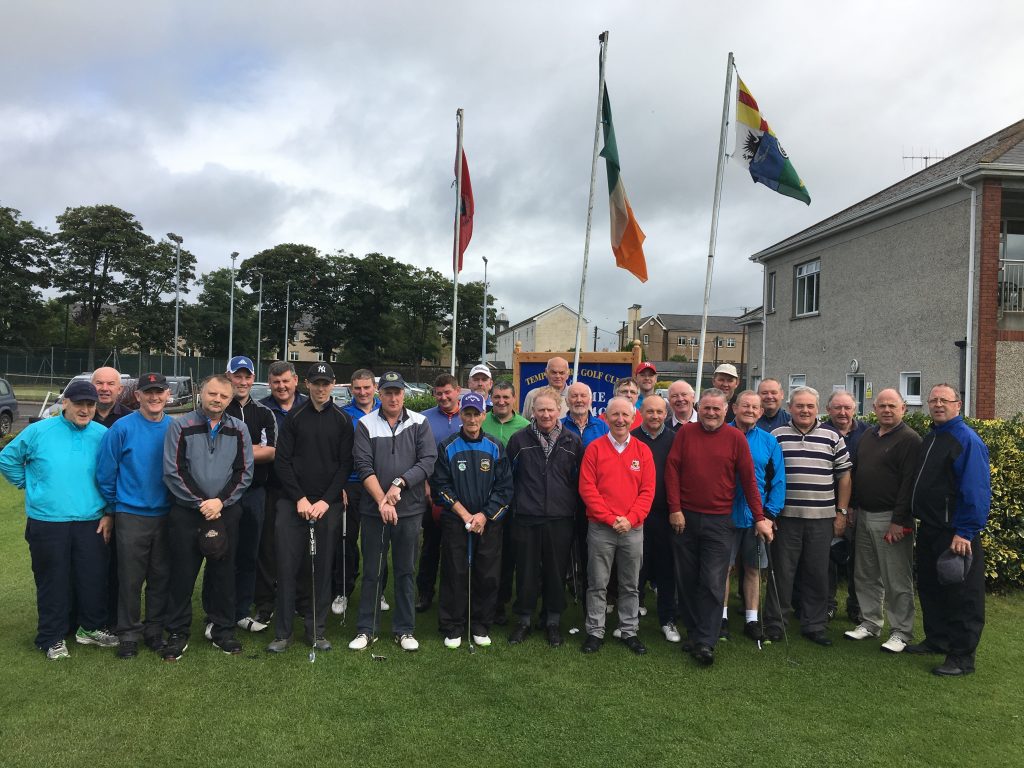 Templemore Golfers who made the 1st. cut of 76 in the Captains prize:  (photo by Tony O’ Toole

The Captains Prize commenced on Friday 24th. Under very inclement weather but did not deter the players from bringing in very competitive scores.  On Saturday 25th. The weather was more favorable and again very competitive scores were achieved.  For Sunday morning the cut was decided at 76.  There was a delay in starting due to heavy showers and water clearing off the greens. The Competition Secretary Liam Leahy explained the ground rules and complemented John Alexandre on his very early start to sweep the water off the greens.  The  Communication Secretary Martin Bohan announced the parings for a shotgun start to make up time due to the bad weather.   The course played well against the players as the 9 hole playoff  leaderboard was constantly changing due to the competitiveness of the course especially the 5th. Par 4 and the 6th. Par 3. It was all to play for right up to the finish.  The progress of play on all competitors was filmed by BRT Ireland from the 9th. Tee box along the fairway to the 9th. green. The view is spectacular as one would see on any TV Golf channel.

Captains Prize Preentations:  the event was held in Murphys Pub.  There was a full attendance which packed the house.  The Competition Secretary Liam Leahy was MC on the nite and gave great credit to all the golfers on a great display of good golf and great sportsmanship. Liam also thanked the communications Secretary Martin Bohan on his wonderful deligent back room support.  Also he expressed his gratude to Patricia Foley on her wonderful welcomed contribution of food today to the players and also throughout the year.  Liam then introduced the Club Captain Tommy Foley to the floor.  Tommy congratulated Pat Looby on winning his Captain Prize.  Tommy continued by expressed his delight and honour to be Captain and thanked Martin Bohan for putting him forward for the task, an experience I will always be proud of and never forget. Tommy also congratulated all the players, all the commitment by volunteers on the course and also his family for their support.  Gesture was expressed by all to the presence of the Golf Union of Ireland president John Moloughney and GUI Munster official Pat Dunne, a great honour for any club to have both as club members.

Lady Captain Sara Hearne on behalf of the Ladies,  presented to the Club Captain a monatory presention in support of the the JB Carr team costs. The jester was deeply appreciated.  Sara also congratulated Tommy on the wonderful friendship during his Captaincy.  The nite continued with good music, food, and Witt into the early hours.

There was a TV commentary panel set up to discuss the club history, winners predictions and the club activities.  Those who took part were Rody Cawley, Seamie Gleeson and PRO Tony O’ Toole.  The compare was Ger Corrigen from BRT Ireland.

All roads lead to Woodenbridge:  Templemore Golf Club now in the final 4 of 208 Golf Clubs; A historic and an extraordinary win in the JB Carr tournament by the Seniors of Templemore Golf Club to be in the final 4 out of 208 clubs participated. The final deciders will be played in Woodenbridge Golf Course on Saturday 1st. September with the final and playoff for 3rd. and 4th. on Sunday 2nd. September. The Clubs remaining in the competition are; K-Club, Portumna, Ballybofey and Templemore. The official itinerary will commence on Friday 31st. on the 10th Tee box at 6.45pm sharp. Teams will be presented with their Provincial Flag and a piper will pipe the teams across the bridge to the front of the clubhouse where the draw will take place. Team managers will be asked to introduce each team member of his team by name. Certainly a proud occasion for the players, their Manager, Templemore Golf Club and their families. To experience this great emotion presentation on Friday 31st. it would be great to see as many club supporters as possible both Ladies and Gents present.

3T’s results; There was a fantastic turnout on Sat. 11th. and Sunday 12th. for this great charity event to help support deaths by suicide through research, intervention and support. The winners were; 1st. Pat Maher. 2nd. Michael Walsh. 3rd. Francis McCormack.

The summer camp training days have now completed. There was a great attendance which is encouraging that their is great interest in this great game by the youth.   Templemore Golf Club Juvenile officers Pat O ‘Connell complement all who took part and also the parents and adults who helped out during the sessions. There were achievement prizes  and encouragement to all to continue playing at every opportunity .   For any information on juvenile golf contact Pat O’Connell 087 9205821.

Men’s Seniors; Results are as follows for Thursday 24rd . Sept. 1st. Team; Liam Daly, Mick Connell , Seamus Gleeson.  2nd. Team; Michael Stapleton, Frankie Shortt, Pascall Whelan.  3rd.  Bertie Keane, Padfy Nolan,  PJ Leahy, John Galvin.  The Seniors is a fantastic event for retired golfers to return to the game with like-minded golfers. If you are over 55 or retired, from any distance or Club you will be more than welcome.

To the JB Carr team on reaching at the all Ireland final in Woodenbridge this weekend.

John Stapleton announced on behalf of the seniors that they are going to organise a social nite in the Club Lounge on Monday Night 3rd. Sept. at 9.30.

1st. and 2nd. Sept. The J B Carr, All Ireland Final in Woodenbridge.